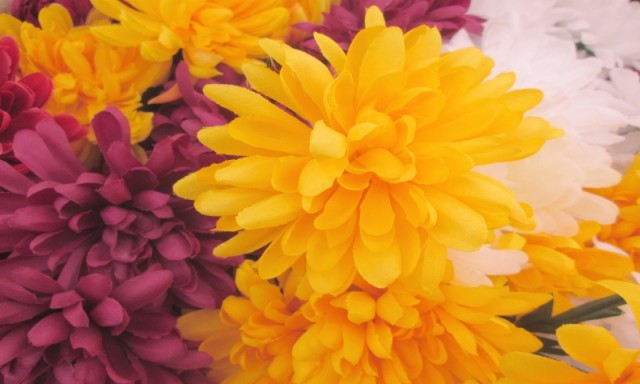 How to choose flowers for the grave

Flowers add kindness to the funeral ceremony, but flowers are also indispensable for Buddhist altars and graves.

Flowers suitable for visiting graves and flowers to avoid

There are no rules about flowers that are particularly suitable for visiting a grave or flowers that you want to avoid, but those sold as a pair at a flower shop etc. make sense, so it is a good idea to refer to them.

First of all, Buddhist flowers have good watering and longevity is the first priority.

In the summer under the scorching sun, it is especially fragile, and the precious flowers will soon be destroyed, so it seems that chrysanthemums with good flowers are often used mainly with strong greens such as illicium anisatum and hiba. is.
Chrysanthemums have been considered a noble flower since the Heian period, and they also appear in The Tale of Genji.

Even now, September 9th is still a custom of celebrating as a festival of Chungyang.

There are so many types of chrysanthemums these days, and you can make various variations of chrysanthemums with just chrysanthemums, so why not make your own handmade flowers and bring them to your grave?
In that case, the number should be odd, and the shape should be a rhombus with a tall flower like a commercially available Buddha flower in the background, and the leaves that are submerged in water should be removed cleanly to prevent the water from rotting.

Basically, until the 49th, we mainly use white chrysanthemums, but after that, it seems that there are many free and relatively flashy color combinations.
Buddha flowers, which are chrysanthemums and strong flowers of the season, are recommended because they have a long life.

If the flowers are low in water, they will not stand out even if they are dead, so in the summer it is a good idea to choose dry flowers such as straw grass and cockscomb.

Flowers you want to avoid visiting the grave

It is safer to avoid flowers that are too poorly landed or sensitive to light, but avoid poisonous and thorny flowers, odorous flowers, vine flowers, and pollen-rich flowers.
If the deceased loves roses and wants to use them, remove the thorns before using them.

Plants contain some toxicity, such as alkaloids, so don't worry too much about it.
Many vines have strong vitality and may get entangled in the grave, so it is best to avoid them.

When using flowers with a lot of pollen such as lilies, remove the yellow part of the pollen before using it so as not to stain the tombstones.

The reason why poisonous illicium is used for Buddhist flowers

Although illicium is toxic to flowers, leaves and fruits, it is almost always used for Buddhist flowers.
It is a long-standing tradition, and it is said that when it was a burial, it was put in a casket to prevent animals from ruining the grave.

In modern times, it seems that some regions do not use anisatum for Buddha flowers, while others use only anisatum.
In Shinto, only Sakaki is used, but there are various ways to choose flowers for the grave.

The original flowers are also nice

When arranging flowers in the garden, soak them in water overnight, arrange them the next morning, and bring them to the grave for a long time.

The basic principle of Buddhist flowers is to combine colored flowers with evergreen leaves on the back, so when assembling garden flowers into Buddhist flowers, use greens such as Hiba, Masaki, and Koyamaki.

About manners of visiting a grave

I definitely want to bring flowers to visit the grave, but what else should I bring?

And beads.
I would like to have cleaning tools, rice scoops, and pail, but there are also places where you can rent them at a reien or a temple.

However, it is possible that someone has already visited the grave before they visit the grave, so if you have a close relationship, it is a good idea to consult with each other.

About the procedure for visiting the grave

First, remove dead flowers and clean them.
After that, add water to the flower stand and offer a pair of flowers.
We will serve alcohol and other things that the deceased liked.

Next, light the incense stick and serve it. When should I visit the grave?

Which is the correct answer?

It seems that there is no right answer because it is a custom of each house.
However, beer and liquor are NG because they cause odors and damage tombstones.

Is the offering flower useless with artificial flowers?

There is no rule that it is useless, and it seems that some people actually use artificial flowers, but fresh flowers are also a symbol of fragility.
The flowers offered in front of the grave also serve to inform those who hand the flowers that "even if they bloom so beautifully, they will die in a few days."

The reason why the offering flowers are not facing the grave but toward those who worship with their hands together is to recognize the "transience of human life" and teach them to live without regrets today.
Fresh flowers seem to have the effect of purifying the hearts of worshipers.

In Buddhism, it can be said to make living people aware of the sense of impermanence and the importance of life.

It is customary to offer flowers when visiting a grave, but this is not dedicated to ancestors or deceased people, but is actually to stabilize the minds of those who visit.

I feel the depth of Buddhism, but the tombs and altars may all be the heart of the people living in this world.
When choosing a flower, don't worry about it, but choose a flower that the deceased likes or a flower that you like.

People have been buried with plants since the early days.
You can feel good just by touching the plants, and your sadness will heal.

Why don't you visit the grave with flowers when your heart is tired?